Recently included with UIMp is the Service Adoption Utility.

The Service Adoption Utility was originally a standalone tool to assist customers who wanted to import environments into UIMp that had not been provisioned with UIMp.

The problem with older versions of UIMp was that there was no Service Adoption Utility and therefore all provisioning needed to be made through UIMp. This caused a whole host of issues…

Now with the Service Adoption Utility all those troubles are a distant past. You can now run a mixed environment. You can make changes outside UIMp with the knowledge that these changes can be imported back into your existing service offerings, if required.

Not only that but if you ever have any issues provisioning new datastores or VLANS, you can finish the configuration manually in Unisphere or UCS manager and run the SAU to import the changes. Not only will the SAU import the new config, but it will delete the partially provisioned objects from with UIMp. Frikkin awesome!

Before you run the service adoption utility you need to ensure the following:

Once these are successful, you can then proceed with the Service Adoption Utility to import your existing hosts, LUNs, etc.

Note: This is best done with EMC (at least the first time), just to be on the safe side.

Connect to the UIMp SAU:

Select your vBlock and continue:

The tool will do a discovery of your infrastructure to determine which components are not currently included in an existing service offering.

UIMp will spit out a list of Blades, VLANS and datastores for you to import. You have to assign the grades for the blades (you can see the warning ‘grade not set’ below as this has not been done yet. Datastores will automatically be imported depending on the storage pool.

Once you hit OK the adoption will commence… 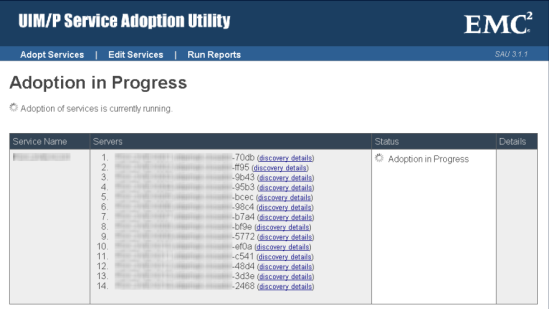 And finally you should hopefully see a nice ‘Adoption Succeeded’ status as per the screenshot below. Job done! 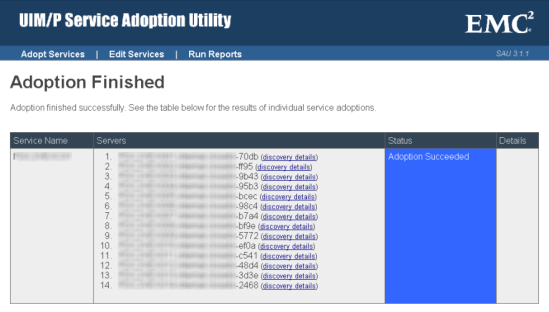 Logging into UIMp you should now see the new service offering available under the Administration->Service Offering tab as per the screenshot below.

The service adoption utility has revolutionised UIMp. It single handedly takes away its major weakness – its inflexibility to co-exist with existing environments, and environments that change outside of UIMp.

I recently had the pleasure of spending some time at the EMC Factory in Cork, Ireland where vBlocks are assembled for the EMEA region.

I cant think of many adjectives that do the size of the factory justice – gargantuan springs to mind. Visiting the EMC factory must be every storage engineers wet dream. A couple of football fields worth of every bit of EMC storage kit you can imagine.

The purpose of the visit was to spend time with the VCE team while they complete the logical configuration of the vBlock 300HX for our client’s main data centres. This involved trying not to get in their way as all the components were configured and trying to assimilate as much information as possible about the AMP Cluster, VNXe, the VNX 7500, UCS Manager, Service Profiles, IONIX UIM and Unisphere.

Once the vBlock order has been raised, the first week is usually spent with physical assembly. Weeks 2 and 3 are spent doing the logical configuration before the vBlocks get shipped to site in the 4th week, meeting the 30 day lead time. As 95% of the configuration is done onsite at EMC the time required at each client site is minimal. This usually involves DOA testing to make sure there has been no damage during transit, integration with the clients aggregation network and then a thorough test plan where every components is pulled, badgered and poked to stress test every possible failure scenario to ensure all parts are acting as required.

Not wanting to get anyone in trouble, I obviously couldn’t take any photos even though the urge was overwhelming. I did however recognise this picture on the web. All vBlocks outside the North America region were assembled in the hallowed turf shown in the picture below. 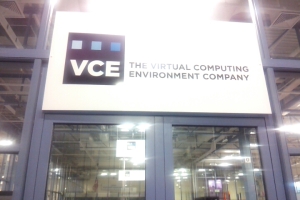 And lastly I must add that even though this was my first visit to a Centre of Excellence, I was pleasantly surprised at the local talent.